Say it loud and proud on social media: British Columbians support a lawsuit against Big Oil 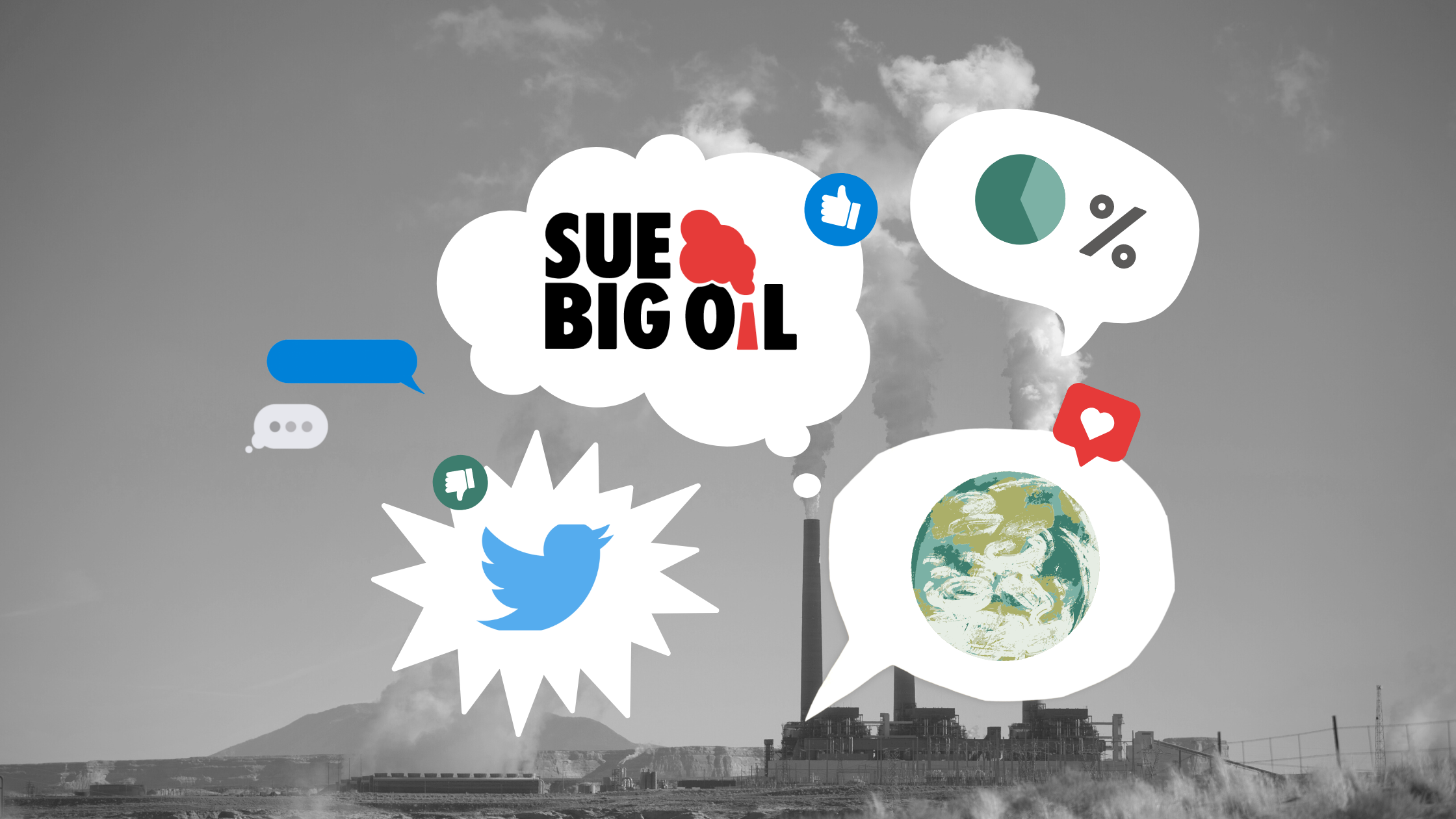 Vancouver’s ‘Sue Big Oil’ decision last month generated some loud controversy. The motion was passed in a 6-5 decision, with councillors agreeing to allocate $1 per resident towards a future class action lawsuit by local governments against major fossil fuel companies for the costs of climate change.

The historic decision was covered in local and international news with climate law experts celebrating Vancouver’s bold move to hold polluters accountable for climate costs currently covered by taxpayers. People also took to social media to express their support for the decision.

The public, in Vancouver and across BC, are worried about the human and financial toll caused by climate change and global fossil fuel pollution, and support their local governments bringing such a lawsuit.

In a recent Stratcom poll, 69% of respondents said they strongly (39%) or somewhat (30%) support this type of lawsuit. Support was strong across the province, the political spectrum, and the so-called urban/rural divide. Yet, amidst all the support expressed on social media for the Vancouver decision there were also high-profile voices – including from the Alberta Government’s “Energy War Room,” along with some oil industry executives and politicians running for Vancouver City Council – using social media to condemn the move as hypocritical virtue signalling.

For these reasons it is critical that the majority – and especially the 39% who strongly support their local governments suing Big Oil – speak out to answer questions and correct misunderstandings to bring people into this campaign.

In this post we respond to some of the social media mudslinging and questions/criticisms circulating on the internet in the days and weeks after Vancouver’s motion. We write this in the hopes that you, dear reader, will feel confident to use this information when you see similar questions or misinformation arising in the future.

In order to understand the rationale behind Sue Big Oil, it helps to start with some cold hard facts. Right now, taxpayers are on the hook for ALL of the costs to prepare for climate change, and to repair climate damages (not to mention, the emotional/human/cultural toll of living through back-to-back climate emergency events).

The cost of dealing with climate change is skyrocketing. The purpose of Vancouver’s motion to Sue Big Oil is to protect taxpayers – by recovering some of the huge costs that the community faces from climate change from the world’s biggest polluters. We need to make sure that this is front and centre in any discussion about why we need to Sue Big Oil.

As I remarked on Twitter, after the Vancouver vote:

Real question: Do the people upset re Vancouver spending $1 per resident on a joint class action to recover #climatecosts understand that the city needs to spend $1 BILLION for protection against rising sea levels (> $1500/resident) + more for other climate costs?

Municipalities are obligated to protect residents from climate change

A lot of online denizens disagreed that a lawsuit to recover municipal climate costs was a municipal responsibility, and felt that the money would be better put to city services.

The irony, of course, is that the costs of clean water, water management systems (including sewage and liquid waste management) and road maintenance are all increasing as a result of climate change. In Vancouver, we must also consider the colossal costs of protecting False Creek from future floods and sea level rise. Other BC communities are facing different costs, but are all affected by climate change – whether you’re in Castlegar, Mission or Prince Rupert.

The fact is that we expect our local governments to spend money to repair municipal infrastructure when storms, heat waves, floods or wildfires cause damage to our communities, and to protect us from foreseeable disasters.

It’s true that funds are also needed for housing, social services and other community needs. But funding for those programs is more likely to be threatened by the massive costs of climate change than by the lawsuit itself. If Vancouver and other local governments are successful in recovering climate costs from global fossil fuel companies, then it will mean more money being available for all the other government services.

Some people argue that Vancouver shouldn’t sue the global fossil fuel industry because it uses oil and gas. This is of course a variant on classic argument that it is hypocritical to criticize the oil and gas industry while living in a society that is dependent on fossil fuels. According to one LinkedIn commenter:

There is also a “solid legal basis” for me to file a class action lawsuit against you and your members for using your vehicles, airplanes etc? There’s no one who is more convinced of the harm you are doing, yet you continue knowingly to bribe my company and many others with payments to continue to produce oil and gas.

There are three important points to respond to this.

First, no one denies that the City of Vancouver, and indeed everyone, has benefited from fossil fuels.

The point of the proposed class action lawsuit is not to excuse Vancouver or taxpayers from responsibility, but to make sure that the oil industry takes responsibility for their disproportionate contribution to causing climate change as well. It’s to make Exxon, Chevron, Saudi Aramco and other companies pay their fair share of climate costs. It’s not hypocritical to demand that everyone pay their fair share of the harm caused by the fossil fuel economy, and that we all do our part to address reduce our dependence on fossil fuels.

Second, the oil and gas industry has massively contributed to climate change in many ways – much more so than the City of Vancouver and individual consumers of oil and gas.

Big Oil’s contribution is also massive in terms of its influence on society and the path that the world has taken in how it produces and consumes energy. Until the late 1980s, many global fossil fuel companies were at the forefront of understanding the risks of climate change and developing possible alternatives to fossil fuels, holding patents in solar, low emission vehicles and more. But in 1992 when the world’s governments signed the United Nations Framework Convention on Climate Change (UNFCCC), and then the Kyoto Protocol, Big Oil chose instead to aggressively spread and fund misinformation about climate science and lobby against climate action.

Thirdly, the courts have consistently rejected the argument that providing a public benefit means that you don’t have to pay for the harm you cause, particularly when the defendants are aware of the harm their actions are causing and could have taken steps to avoid that harm.

The public has won lawsuits against tobacco, opioid and asbestos producers, and we can win against Big Oil

Some on Twitter dismissed the idea that a lawsuit against Big Oil could be successful, arguing that it’s a waste of money even to try.

Should the City of Vancouver spend up to $1 per resident or ~$700,000 towards a class action lawsuit against oil companies for their role in climate change?

Is this even winnable or is this flushing money down the toilet for a symbolic gesture? #vanpolihttps://t.co/5GqAPjE4am

As UBC Law Professor Stepan Wood pointed out at the launch of the Sue Big Oil campaign:

The logic of climate accountability is simple. Companies that profit from selling a product that they know is harmful should pay their share of the costs of the resulting harm. And this logic has been applied successfully to a range of harmful products from asbestos to breast implants to tobacco. So, climate accountability lawsuits are unprecedented in Canada, but don’t confuse novelty of subject matter and scale with novelty of legal theories. These lawsuits can proceed on the basis of well recognized legal wrongs.

No one knows for sure how the Canadian courts will respond to a class action lawsuit against fossil fuel companies, but many legal experts agree that there is merit to the idea.

And one of the great things about bringing this case as a class action is that the first step involves a BC Supreme Court judge ruling on whether the case “discloses a cause of action” – which is lawyer-speak for whether it could be successful. That ruling would likely confirm the legal principles that apply and give both the local governments and the fossil fuel industry and its investors more information about how this case might be argued or whether it should be settled.

A number of social media posts have also argued that lawyers, and not taxpayers, will reap the rewards of a lawsuit against Big Oil. This misperception may come from media reports that erroneously suggested that West Coast Environmental Law would be bringing the case, or that the funding is for “West Coast’s” case.

To be clear: Vancouver and other local governments bringing this case will need to hire a legal team with expertise in litigation and class actions. West Coast is simply advocating for such a lawsuit, and we have no expectation that we would be part of the legal team or be paid by local governments for our work.

We anticipate that the local governments’ legal team will include lawyers working on partial contingency, at reduced rates, as well as in-house lawyers and lawyers working on other arrangements that will keep the costs to a minimum, but at the end of the day, lawsuits are expensive. However, by bringing the case as a class action, the financial costs can be shared among multiple local governments, as well as supported by community fundraising and funding from private donors.

Finally, there are commenters that simply dismiss the possibility that Vancouver and other local governments experience any climate costs because (in the view of their authors) climate change isn’t real. One commenter on LinkedIn states:

This is all assuming you believe the lie that the IPCC and mainstream media are perpetuating about climate change and the impact from fossil fuels. The science clearly portrays a very different story.

Big Oil has been sued in multiple cases across the US and the companies themselves have never argued that the Intergovernmental Panel on Climate Change’s climate science is flawed, or that the burning of fossil fuels is not causing climate change. In a case brought by San Francisco and Oakland, California, Justice William Alsup ordered a “climate tutorial” to help him understand the science of climate change. At the hearing, oil companies publicly backed the science:

“Chevron accepts what the IPCC [Intergovernmental Panel on Climate Change] has reached consensus on concerning science and climate change,” said Theodore Boutrous, who represents Chevron and is heading up the assorted legal team for the five oil companies that are defendants in this lawsuit. But, he said, that didn’t mean that a civil lawsuit was the right way to address climate change. “It’s a global issue that requires global action,”

Over the course of two hours, Boutrous ran through the findings of the most recent IPCC report (released in 2013), acknowledging that global temperatures were rising due to carbon dioxide caused by human activity, that other factors were negligible, and that as a result, sea levels were rising.

So, while some naysayers may still deny climate science, oil companies agree that the world is warming and that this is driven by the burning of fossil fuels (although they disagree that they should be legally liable for it).

There are too many social media posts about the Vancouver motion to Sue Big Oil to respond to every argument raised. However, we’ve tried our best to outline the responses to a range of common criticisms. Other places you can look for suggestions on responding to questions and comments include the Sue Big Oil Frequently Asked Questions and this older West Coast Environmental Law blog post.

If you have other questions you think should be addressed in a future post, feel free to email us at info@suebigoil.ca.